2P!Vietnam is a fandom interpretation of the Hetalia webcomic/anime character of ”Another Color”.

Notice: In this version, we are using Deviantart user "meocherry's" depiction of 2P!Vietnam.

Vietnam has short dark brown hair which is notably longer on her left side (right from the audience perspective) and she keeps it held back with three red hair-clips. Her eyes are usually portrayed as either golden-honey or red. She wears a red jacket, inside is a white no-sleeve shirt and finally a yellow T-shirt. She wears long blue trousers but she usually folds it up to the knee. She always has a small first aid kit in her jacket and some small weapons like a dagger. In her Demon form, Vietnam now has wings, tail and horns to show her demon side. She also wears a more revealing clothing, showing off her sexuality to fool any people to able to kill. Her clothing has a crimson dress with her chest being revealing. Bian wears black gloves and stockings as well. Bian usually carries her staff to show power over the person or country. Sometimes, she will carry a mask to mask her emotions and behavoir to the person she will murder.

She appears to be a cheerful character, most fan-arts have her with a cheerful smile. She is considered a person with a great love for money, much like 2P!China . Some fan-fics on Quotev depict her as a sadist. Said fan-fics also say that she is extremely strong and, much like Oliver , sweet on the outside but hiding something on the inside.

She is a noticeably good chef and enjoys cooking, but is lazy most of the time. Her hobbies include using machinery, and she spends most of her free time training/going on killing sprees or surfing the web.

t is common for 2P!s to be portrayed as murderous, sociopathic and possibly insane. To most, they are a darker version of the original Nations. However, because the Original Nations can be portrayed the same way by the fandom, how much hold this has depends on the person making the story.

Vietnam will most likely use her staff in her demon form to murder. Thought she will only murder someone if they have somthing she desires or wants. Sometimes she is drawn with a small saw and a long leather wire If she is in her normal 2p form. 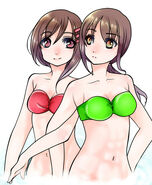 Add a photo to this gallery
Retrieved from "https://2phetalia.fandom.com/wiki/Vietnam?oldid=18059"
Community content is available under CC-BY-SA unless otherwise noted.